The first time I saw Dolphie was on a facebook group for pet sales in South Wales. We were actively searching for a second dog to join our family as we’d only recently moved to Wales and were renting a large house with an even larger garden so we had plenty of space to expand our family. Our other dog, Eva, would benefit from a buddy and play-mate, and I had already been dreaming of having a second dog long before we actually made the move. When I saw his picture in my newsfeed, I knew instantly that he was going to be ours.

He was living with a young family and they were about to have another baby so there simply wasn’t room for him in their home anymore. We agreed to meet up in Newport so we could meet him and introduce him to Eva, and I was so excited. When we saw him in person, he was shy and quite reserved around us, showed little interest in Eva and stayed close to his the owner’s legs. The man told us that he had broken into Dolphie’s previous owner’s home and taken him from them as they had been abusing him; I wasn’t really that surprised and I can’t say it really bothered me, either. Where I grew up, people did things like that all the time. Besides, he did it for a good cause. Dolphie had been in a poor state when they took him, his fur all matted and his body malnourished. They had only had him for a year and the man doted on him. He was clearly upset that they were having to sell him on and they asked us a lot of questions about our arrangements and about Eva, which we were quite frank about.

Despite Dolphie’s shyness, I knew from looking into his eyes that he was gentle and sweet. 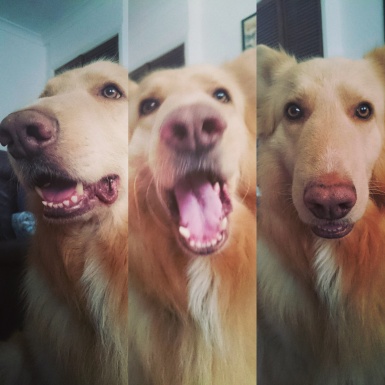 We decided there and then that we wanted to take him home with us. We had to go to a cash-point because we hadn’t even had the fore-thought to take money out as we hadn’t expected that we would buy him. The woman had to lead her boyfriend away because he was so heartbroken about leaving his dog with us, which was very hard to watch, but I had made the vow that we would never rehome Dolphie and that we would always be there for him.

On the train home, Dolphie sat with my wife while I took care of Eva, and I believe at that moment in time, he became inseparable from her as she calmed him and spoke to him. I think he knew right away that she would be his mama and would protect him. He was very relaxed and quiet and trusted us from the very beginning.

Because of his difficult past, we began to discover that he had some strange behaviours. The first we noticed was that he was terrified of the sound a steel bowl makes when its pushed along the ground, so dinner time was hard work to begin with as he struggled to eat his food. I was determined to relieve him of this unnecessary fear and encouraged him and taught him that his food bowl was a source of good things. It took nearly a year of encouragement before he would run to his bowl excitedly at dinner time.

Another thing we noticed was that he loved to come from behind and wriggle his way between our legs when we were standing up (which resulted in many hilarious times where he almost knocked mum over as she has such short legs!). Sometimes he would do it when I was stood at the sink washing the cutlery and it would send me flying backwards. He was incredibly strong!

We didn’t know when he was born, and we only had the vague idea that he was around 4 years old at the time, but even that was a guess. We didn’t really know anything about him besides what we had been told, but it didn’t matter. He loved children and whenever he saw a pram, he’d want to run over to it. One time I allowed him to do so and he rushed over with his tail wagging to give the child a lick on the face. I never once saw him growl or show any aggression to a human being; if he didn’t want to interact with someone, he would simply turn away and behave as though they didn’t exist.

The hardest thing we had to deal with was how he reacted to fast movements when he first came to live with us. For months, he would cower and shrink away in terror when I lifted my hand to pet him as though he believed I was going to strike him. It broke my heart to see such a beautiful, kind-hearted animal cower like that. It took a long time for him to figure out that our hands were a source of love and attention, not weapons to hurt him with. Likewise, it took him a little while to figure out that Eva was the big sister and before long, he would follow her around and go to her for guidance, especially at the park when we went for a game of fetch. She protected him from other dogs and treated him like her little brother despite her bossiness, and she never let him catch the ball but he would still run after it all the same!

On the field, they would always run around side by side together as though in formation and he would stand by while the madam sniffed before going to sniff it himself, like a true gentleman.

He loved to eat carrots and cucumbers for a treat. When I went to cook in the kitchen, he would sit behind me and keep me company (Eva always ran straight out into the garden), and there he would wait for me to drop him carrot tops and vegetable off-cuts for him to nibble on. One time, we had gone shopping and put the bags full of food on the kitchen floor so we could start putting it away in the cupboards when we heard a crunching sound in the living room. We went in to find that Dolphie had sneakily swiped the bag of carrots and was munching on them! He rarely got up to mischief and it was very unusual for him to misbehave, so when he did, it was usually met with laughter.

He also loved tyre and rope swings. There was a tyre swing at the park that someone had tied to a tree with some rope, and he would spend ages jumping upon it and tugging it around. Sometimes me and Eva would walk away to go and play fetch and he would be so absorbed in his game that he wouldn’t notice we had gone so I would have to call him to come away from it, but even then he would so with reluctance. I had planned to put a tyre swing in our garden for him to play with, but sadly I never got the chance.

Dolphie was an excellent swimmer, so whenever we went to the beach and my wife went into the water for a swim, he always tried to accompany her, even when the waves were rough. I remember once that we almost got trapped by the tide on Swansea beach, as we had crossed over to a sandbar and the tide began to come in so fast that it separated us from the beach. We had to wade across, and the water was up to our waists. Dolphie swam across like it was nothing but Eva can’t swim so I had to carry her across while my wife waded in front, and Dolphie kept swimming back and forth as though to check up on us and make sure we were alright. As I said, he was very strong and incredibly muscular underneath that thick fur coat and he had enormous feet. His paws were as big as the palm of my hand with webbed toes. As he wasn’t pure German Shepherd, we think he was half Golden Retriever, mainly due to the colour of his eyes and coat but also because these other attributes.

He was always the play instigator. Eva is a bit of a grumpy old lady, but he brought out her inner puppy. They would run and chase and leap on each other and bark and yap like a pair of pups. Now he’s gone, it’s as if that inner puppy inside Eva has disappeared.

I’m not going to talk about Dolphie’s illness or what happened after his diagnosis. By then, he had lost so much weight and was in so much pain that he was a shadow of the dog we knew and loved. I want to remember him in the way I knew him for the short time we were together, the dog with such a sensitive intuition that he would come to me when I was upset to comfort me. The dog who formed such a close relationship with my wife that his loss has caused such a deep and fathomless grief in her that even smiling is painful.

We will always miss our playful prankster, our furry baby and our best friend. There is a gaping hole left behind in the space that he once occupied and I don’t know how we will ever fill it. 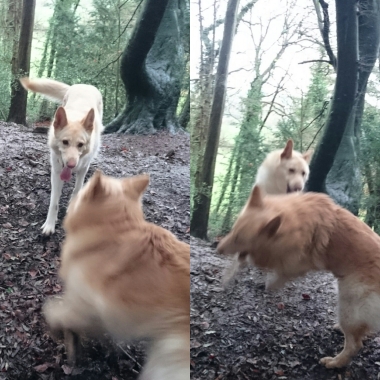 We don’t get a lot of time on this earth, and for dogs, that time is even shorter. They give us so much and expect so little in return. They trust us with their lives and protect us from harm, give us company and friendship and joy whilst living every day without worries or cares. Dogs carry us humans as their burden without ever complaining. We don’t deserve their love, but they give it anyway. Even the most evil of people have dogs who love them regardless, because in their eyes, we are magical gods with the power to control every aspect of their existence.

I know that we did the best we could for Dolphie and we never let him down. He experienced so many let downs in this past. The first time I ever bathed him, he spent the whole night crying because the last time he had been bathed, his owners had sold him on. He was convinced that he was going to be passed onto another home and that he would lose his new family. I knew that even if we lost our jobs, our house, our home, we would never let him down and we stuck with him right to the end, right until that last moment when we said goodbye, we held him, we were there for him. I love him and miss him so much and I don’t think I’ll ever find another dog like him. 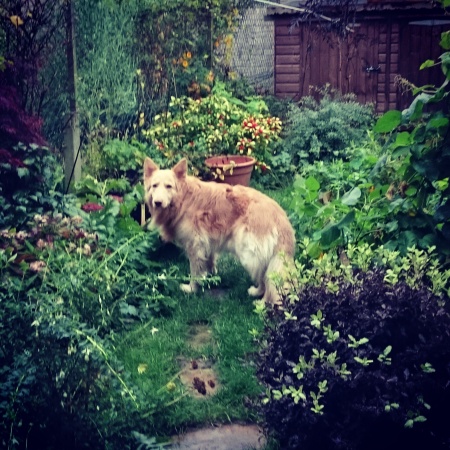 I am an author of LGBT-focused Horror Fantasy. View all posts by nemrowan

One thought on “In Memory of Dolphie”